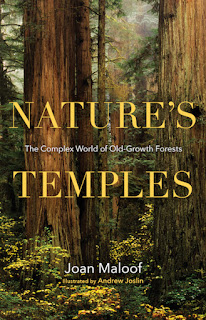 I wrote this book -- with the help of many experts -- because I wanted to share what scientists have learned about old-growth forests. Bottom line? These left-alone forests are much richer in biodiversty than forests that have been managed. I hope this book helps people across the planet make the case for why "their" favorite forest should be preserved.

I wrote it to be useful, not necessarily to be a big seller, but I have been so pleased that the New York Times took note of it, and it made it to Amazon's #1 spot for new releases in the natural resources category.

Link to order it on Amazon
Posted by For the Earth at 3:55 PM No comments:

Speaking for the Forests at the Essex, NY, Grange October 7th at 7pm


Speaking for the Forests at the Essex, NY, Grange
October 7th at 7pm

October 7, 2016, 7:00 p.m.
Join Dr. Joan Maloof, founder and executive director of the Old-Growth Forest Network on Friday, October 7 at 7:00 p.m., at the Whallonsburg Grange for a discussion about old-growth forests: what they are; where they are; and how we can preserve them. Dr. Maloof will talk about the current status of the earth’s forests, particularly, the ancient forests in the Adirondacks and eastern US.  Then she’ll share the Old-Growth Forest Network’s vision for protecting the remaining and future old-growth forests.
CATS is co-sponsoring this event with the Eddy Foundation, Northeast Wilderness Trust, and the Wildlands Network. Representatives from each organization will be on hand to discuss the forest-saving work of their organizations and answer questions. Forest owners, especially those with tracts of older trees, are encouraged to attend along with tree lovers of all ages to learn about and support the growth and preservation of older forests.  The event is free and open to the public. If you have further questions about this event please call (518-962-2287) or EMAIL Champlain Area Trails.
Posted by For the Earth at 7:25 PM No comments:

Glencarlyn Park in Arlington County, Virginia, is added to the Network A wooded parcel in Arlington’s Glen Carlyn Park was recognized by the Old Growth Forest Network.
When thinking of Arlington, a community renowned for its urban villages and bustling Metro corridor, few people think: old growth forest.
Yet just south of Route 50, in verdant, secluded Glencarlyn Park, stately oaks and hickories — some reaching more than 100 feet into the sky – have flourished for generations. One Black Oak’s trunk is nearly 12 feet around.
Some of the park’s trees date back more than two centuries and were likely saplings when, just across the river, the British burned the White House during the War of 1812. Amazingly, this magnificent stand of trees has never been logged.
“We do not know why the area was never logged,” said Alonso Abugattas, Arlington County’s natural resources manager. “It may have been because of the rugged slope and the poor soils that would have made it unattractive for farming.”
It is the pristine nature of these 24 heavily forested acres within Glencarlyn Park’s nearly 96-acre spread that has earned the designation of Old Growth Forest by the Old Growth Forest Network. The national organization works to preserve, protect and promote the few remaining stands of old growth forest in the United States. Roughly 95 percent of such forests have been removed or radically altered.
Some 100 ancient trees survive in Glencarlyn Park’s old growth parcel. The designation recognizes not only the trees, but the shrubs, other plants and wildlife they support.
Arlington’s is the fourth Old Growth Forest location in Virginia and the only one in Northern Virginia. This is part of a parcel in Glen Carlyn Park that was designated part of the Old Growth Forest Network (shown here with Greg Zell, now-retired natural resource specialist).
Glencarlyn Park is home to the second oldest forest in Arlington (the other being a small part of Arlington National Cemetery). The parcel, dominated by oaks – White Oak (Quercus alba), Black Oak (Quercus veluntina), Southern Red Oak (Quercus falcata), Scarlet Oak (Quercus coccinea), and Chestnut Oak (Quercus montana), also contains ancient Mockernut Hickory (Carya tomentosa) and Pignut Hickory (Carya glabra), and Mountain Laurel. Glencarlyn Park is in one of seven County-designated Natural Resource Conservation Areas.
Glencarlyn is one of Arlington’s largest parks. Connected to Four Mile Run and the W&OD trails, the park boasts a playground, an amphitheater, a dog park and the Long Branch Nature Center.
Learn more about the health of Arlington’s urban forest and tree canopy.
Arlington Va., is a world-class residential, business and tourist location that was originally part of the “10 miles square” parcel of land surveyed in 1791 to be the Nation's Capital. Slightly smaller than 26 square miles, it is the geographically smallest self-governing county in the United States, and one of only a handful with the prized Aaa/AAA/AAA bond rating. Arlington maintains a rich variety of stable neighborhoods and quality schools, and has received numerous awards for Smart Growth and transit-oriented development. Home to some of the most influential organizations in the world — including the Pentagon — Arlington stands out as one of America's preeminent places to live, visit and do business.

Posted by For the Earth at 1:31 PM No comments:

The Story of Saving a Salisbury, MD, Forest

(Click on the link above to read all about it.)

"It was like watching a dream come true." This is a nice long article and I am honored to have been given the opening line.

Posted by For the Earth at 5:27 AM No comments:

Reinstein Woods to be dedicated in Old-Growth Forest Network

Dr. Joan Maloof, founder of the Old-Growth Forest Network, will be on hand to present a dedication sign and a certificate to Meaghan Boice-Green, center director.
Following the dedication ceremony, participants will walk through the preserve to view the Champion Beech Tree, which is the largest American Beech tree in New York State, according to the Department of Environmental Conservation.
Reinstein Woods will be the first forest in Erie County to join the ranks of the network, with the next-closest dedicated areas being DeVeaux Woods State Park in Niagara County and Zoar Valley Unique Area in Cattaraugus County.
“When we look at a forest, very little appears to change from year to year, but change is happening slowly. Forests, like humans, can be classified as young, mature or old. Because of past disturbances old forests are the rarest,” reads the network’s website. “Sometimes the disturbance has come in the form of a tornado, an insect, or an intense fire; but most often the disturbance has been from logging. As a result only a few percent of the western forests are old-growth, and only a few tenths of a percent of the eastern forests are old-growth.”
Among the aims of the network is the mission to make forests accessible to younger generations now and in the future by having a minimum of one forest in each county where they naturally grow, left wild forever. According to the network’s website, of the 3,140 counties which span across the country, it is estimated that 2,370 of them will naturally support a forest.
The dedication ceremony will take place at 10 a.m. Friday, Sept. 11, at the Reinstein Woods Nature Preserve, 93 Honorine Drive, Depew.
Refreshments will be served at the event and local officials, Michael Gettings, president of Friends of Reinstein Woods, volunteers and partner organizations are expected to attend the event.
Posted by For the Earth at 5:05 AM No comments:

SUMMERSVILLE, West Virginia – Carnifex Ferry Battlefield State Park has been recognized as part of the Old Growth Forest Network. Joan Maloof, founder and director of the Old Growth Forest Network, presented a certificate of recognition to Supt. Sam Cowell Thursday April 16, 2015.
The old growth forest found in Pierson Hollow in the park is one of only four dedicated forests in West Virginia and is the only forest dedicated in Nicholas County. The trees are between 250 and 300 years old; the oldest tree is reported to be 400 years old.
The area is open for visitation year-round and can be accessed by taking the Patterson Trail across from the museum parking lot and then the Pierson Hollow Trail at Carnifex Ferry Battlefield State Park. To learn more about Carnifex Ferry Battlefield State Park, visit www.carnifexferrybattlefieldstatepark.com

About the Old Growth Forest at Carnifex Ferry
Nestled in the Pierson Hollow area of Carnifex Ferry Battlefield State Park are 30 acres of old-growth forest on the rim of the Gauley River Canyon of West Virginia. At the start of the trail, hikers will pass through late successional stands with yellow poplar and hemlock trees dominant in the lower area. Oaks dominate the upper slopes and some pine stands are found on the flats. Dense rhododendron thickets are along the stream and trail. This is one of the nicer virgin areas left in West Virginia, according to the website www.oldgrowthforest.net.
As hikers continue down the hollow, the trees are older and the canopy is dominated by hemlock and tulip poplar with an occasional northern red oak. There are several generations of course woody debris on the forest floor, which were augmented by the heavy snows of super storm Sandy in October 2012 which tore the crown off many mature trees.
Joan Maloof, Professor Emeritus at Salisbury University, founded the Old-Growth Forest Network to preserve, protect and promote the country's few remaining stands of old-growth forest.
Dedicated forests in West Virginia are Preston County: Cathedral State Park (scheduled for dedication April 22, 2015, at 10 a.m.); Nicolas County: Carnifex Ferry State Park; Fayette County: Stonecliff Old Growth, New River Gorge National River; and Pocahontas County: Gaudineer Scenic Area, Monongahela National Forest.

Posted by For the Earth at 6:38 PM No comments: 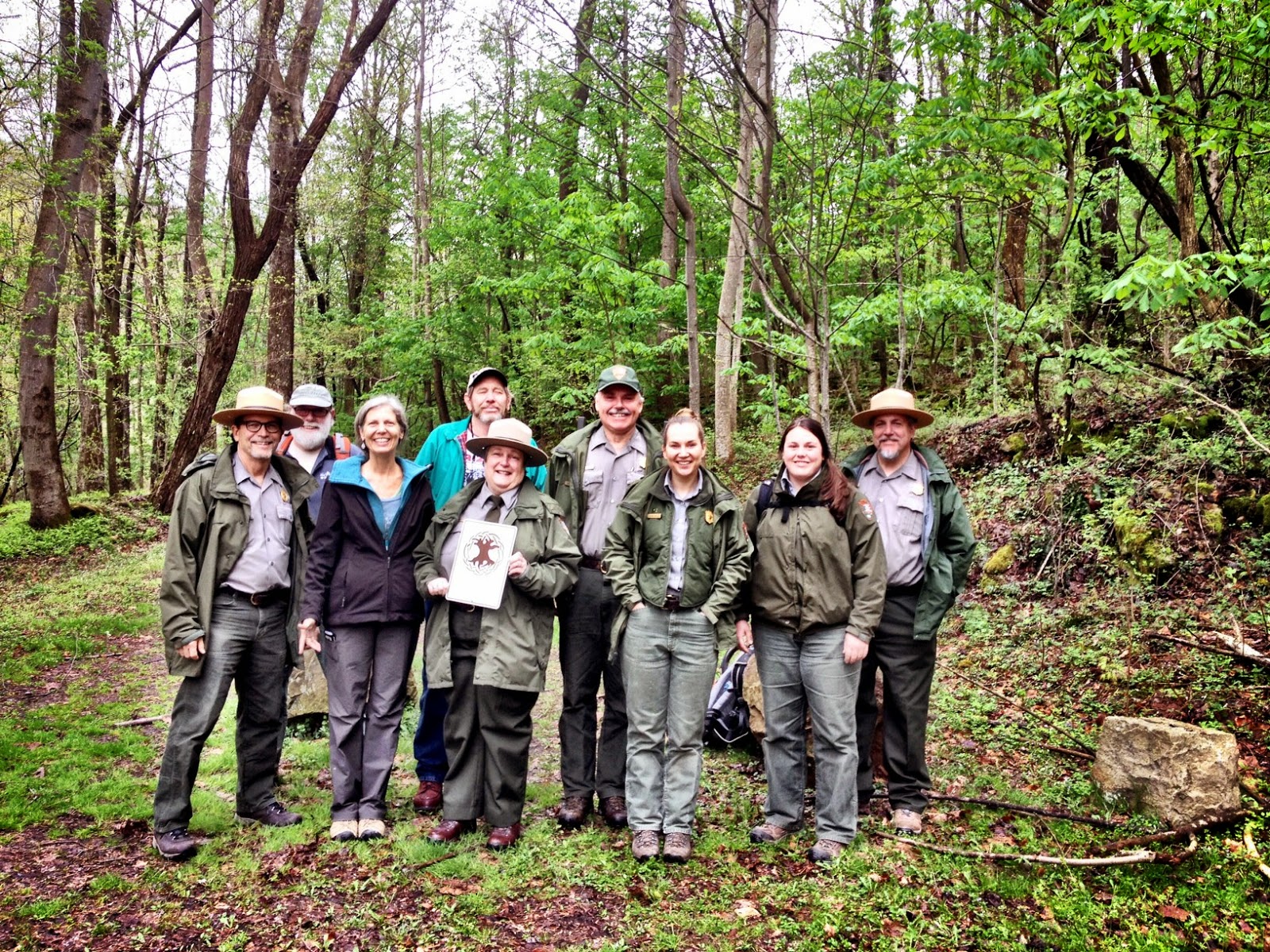 Posted by For the Earth at 4:25 PM No comments: