Enjoyed a chat with Andrea Martin today on her "Mindful Shift" BlogTalk Radio show. My interview starts about 4min 30sec in
http://www.blogtalkradio.com/amlovegren/2015/03/23/mindful-shift--a-conversation-wtih-joan-maloof 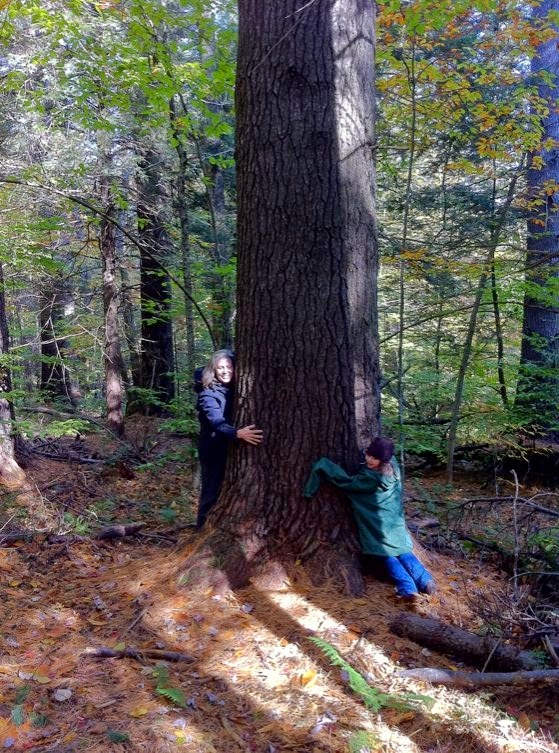 Posted by For the Earth at 5:11 PM No comments:

The Oak Woodlands Natural Area in Golden Gate Park received a special designation on March 14 as it was officially included into the Old-Growth Forest Network. The mission of the Old-Growth Forest Network (OGFN) is to connect people with nature by creating a national network of protected, mature, publicly-accessible, native forests. The goal is to preserve at least one forest in every county in the United States that can sustain a forest, estimated to be 2,370 out of a total of 3,140 counties.

States that already have forests in the network include New York, Massachusetts, California, Georgia, Ohio, Pennsylvania, Maryland, Colorado, Hawaii, Michigan, Virginia and Florida. The Oak Woodlands Natural Area will join previously dedicated forests in California in the Old-Growth Forest Network. The California representatives thus far are:
Special thanks to the Friends of the Oak Woodlands and our volunteers system-wide, who each year give more than 185,000 hours of their time and energy to improving our parks and programs.
Posted by For the Earth at 9:20 AM No comments:

Children of the Great Oak

I am a forest lover and protector, so when I first came to southern California and looked out over the sagebrush and chaparell covered hills I enjoyed the views, but I missed the forest. 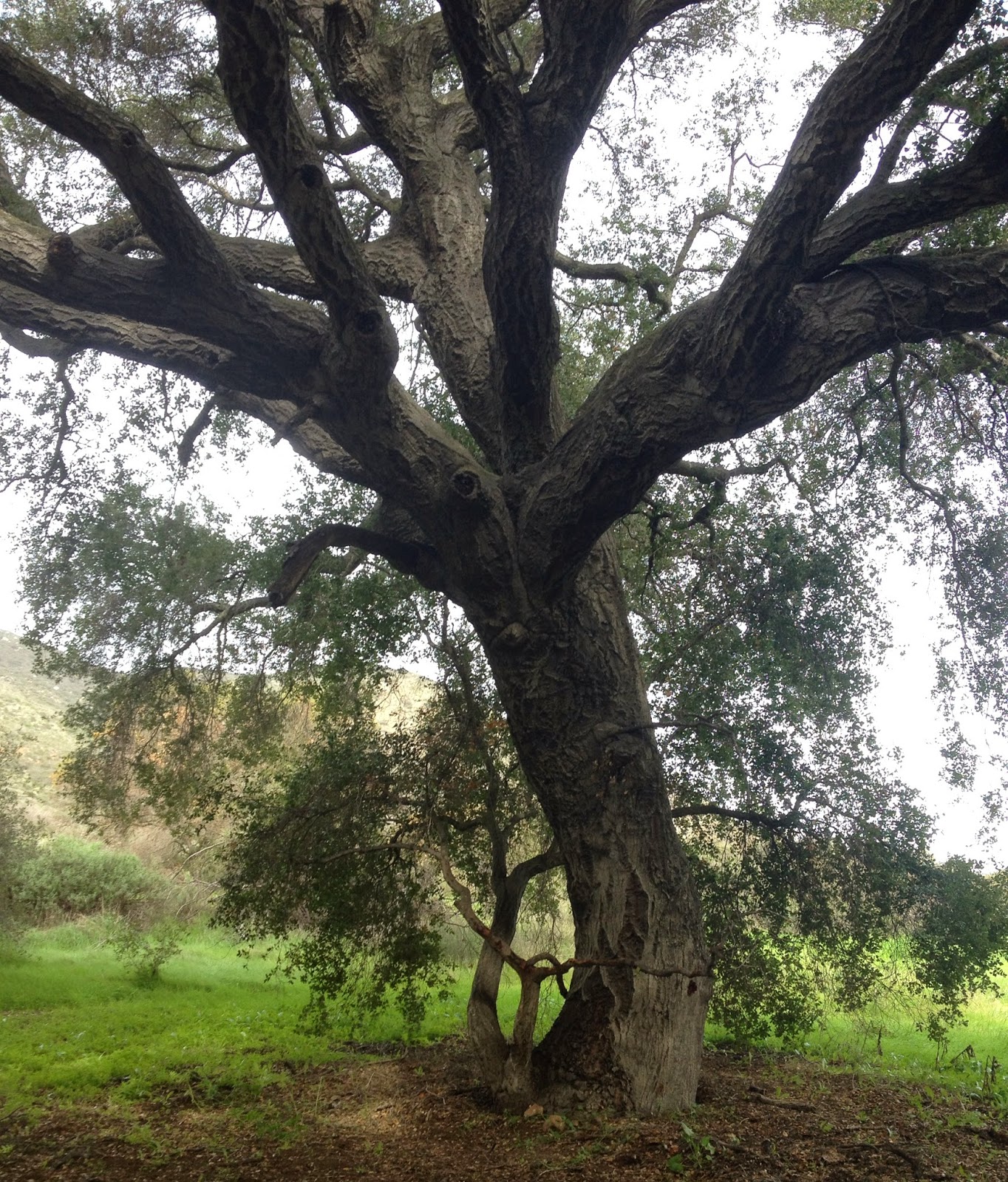 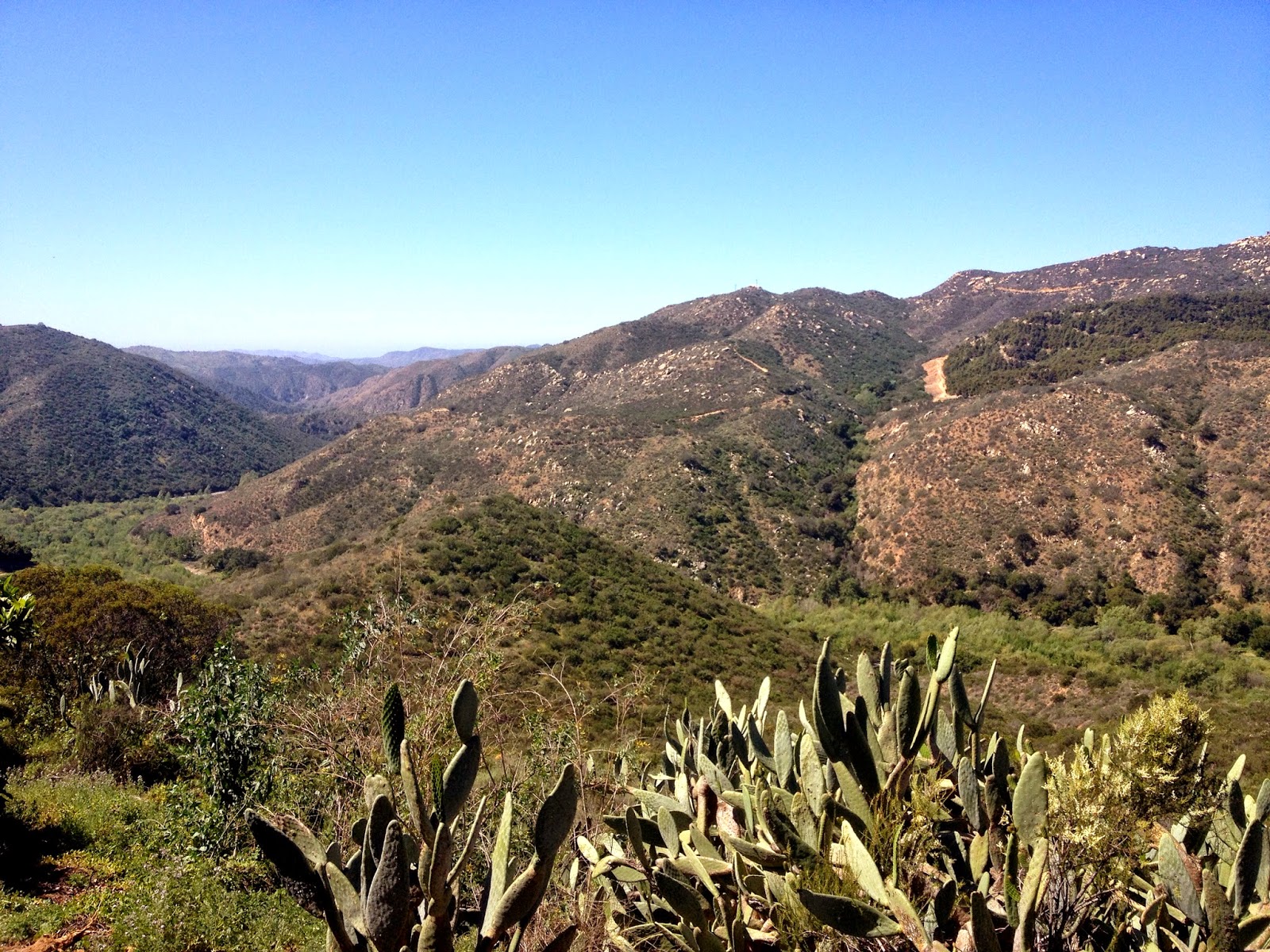 This summer, however, I took some extensive hikes along the Santa Margarita River in Fallbrook and I was surprised, and so pleased, to find some incredible coast live oak trees (Quercus agrifolia).

First was the “Bench Tree” where a local trails group had installed a bench so one could sit and enjoy the shade and the structure of this lovable tree. Sitting on the bench and admiring this tree, it appears that the trunk gets wider, instead of narrower, as it rises above one's head. 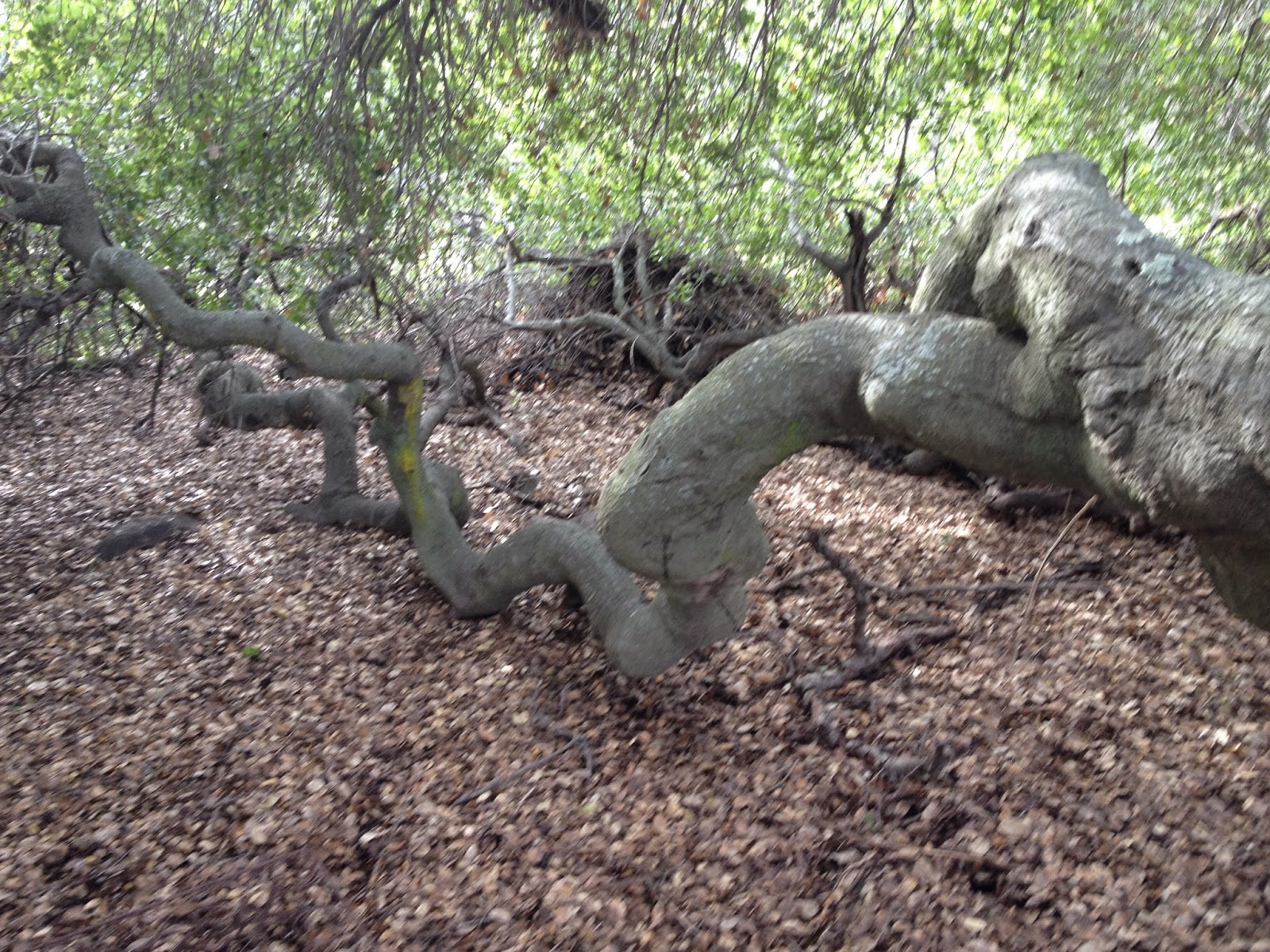 Very close to the Bench Tree is the “Magic Dragon” tree. Although it is not as tall or massive as the Bench Tree, like the Lochness Monster or some ancient sea serpent its huge limbs seem to writhe across the ground. Farther up the trail is an oak tree that took my breath away. I call her the “Grandmother Oak” and she stands like a sentry guarding the entrance to an arroyo. A very interesting upright boulder keeps her company there. Although she is old and massive she seemed vulnerable, perched as she is on an easily erodible hillside. 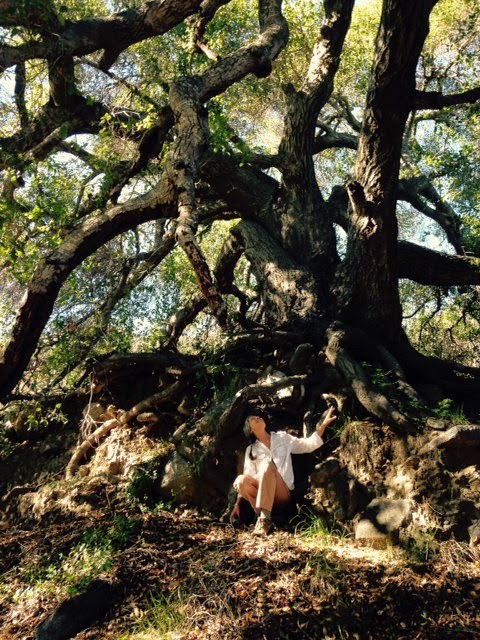 These amazing trees were more than enough for me, but then I found a fourth. I call this one the “Triangle Tree” because when you sit where I am in the photo you can look up and see where limbs have grown together to form a complete triangle. I didn’t photograph that because it is most exciting to find it yourself. I have never seen anything like it in all my visits to forests and close observations of trees.


There are many more special trees along the Santa Margarita River, but these are my favorites.

Then I heard about the "Great Oak" of the Pechanga Band of Luiseno Indians. These native people are still living on the land their ancestors have lived on since before recorded history -- perhaps as long as ten thousand years. How did the Pechanga survive all these years? A dripping spring in the mountains provided water all year round; bark from the Palomar Mountain cedar trees provided material for shelter; and acorns from the oak trees provided food.

When "white man" first described the Pechanga and their way of life they called them a crazy people because they would rather be cold in the winter than cut their oak trees for firewood.

Through the great generosity of the tribe's Cultural Director, Gary Dubois, I was given permission to visit the Great Oak. Fortunately it has been protected by both a federal trust and by a heavy-duty locked fence with tight security. As I finally approached the tree I wondered what I would find. Would I be disappointed?

The answer: absolutely not. 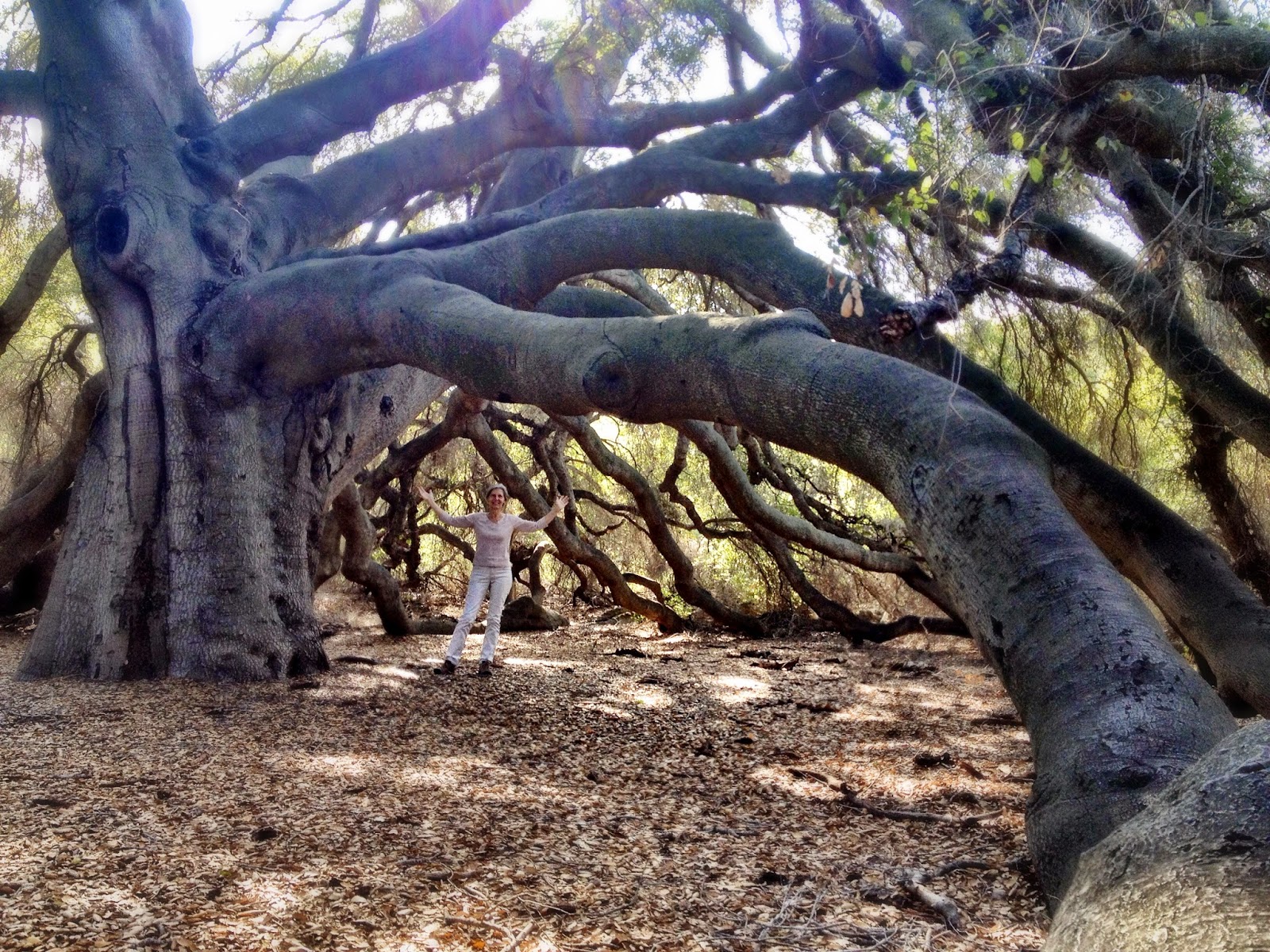 No photograph can do justice to this tree that reaches in every direction with strong sinuous limbs that reach outward, then dip down toward the ground -- sometimes into the ground -- and then rise again. I was drawn to stroke my hand along a few of these mighty lower branches.

The main trunk of the tree is healthy and vigorous with large limbs. The tree is estimated to be between eight hundred and a thousand years old -- no one know for sure.

This tree spoke to me of potential, for just as every child could grow up to be the world's next great peacemaker, so does every coast live oak have the potential to become as magnificent as this one. If it finds enough water, if it escapes the hottest fires, if it can withstand insects and diseases, if it is not destroyed by humans.

How many trees have we cut already that could have become "Great Oaks"?

Then it became clear to me that the oaks in the Santa Margarita River Wildway could be thought of as "Children of the Great Oak." They are only four miles away, "as the crow flies." And a crow could literally carry an acorn that far. Or, more likely, hundreds of years ago a human resident could have dropped or planted the acorns that germinated to become these trees. Mother Nature has her ways. And each one of these oaks in the river valley have the potential to be the next great, great oak. If.

And the one if we have some control over is protection from human destruction. 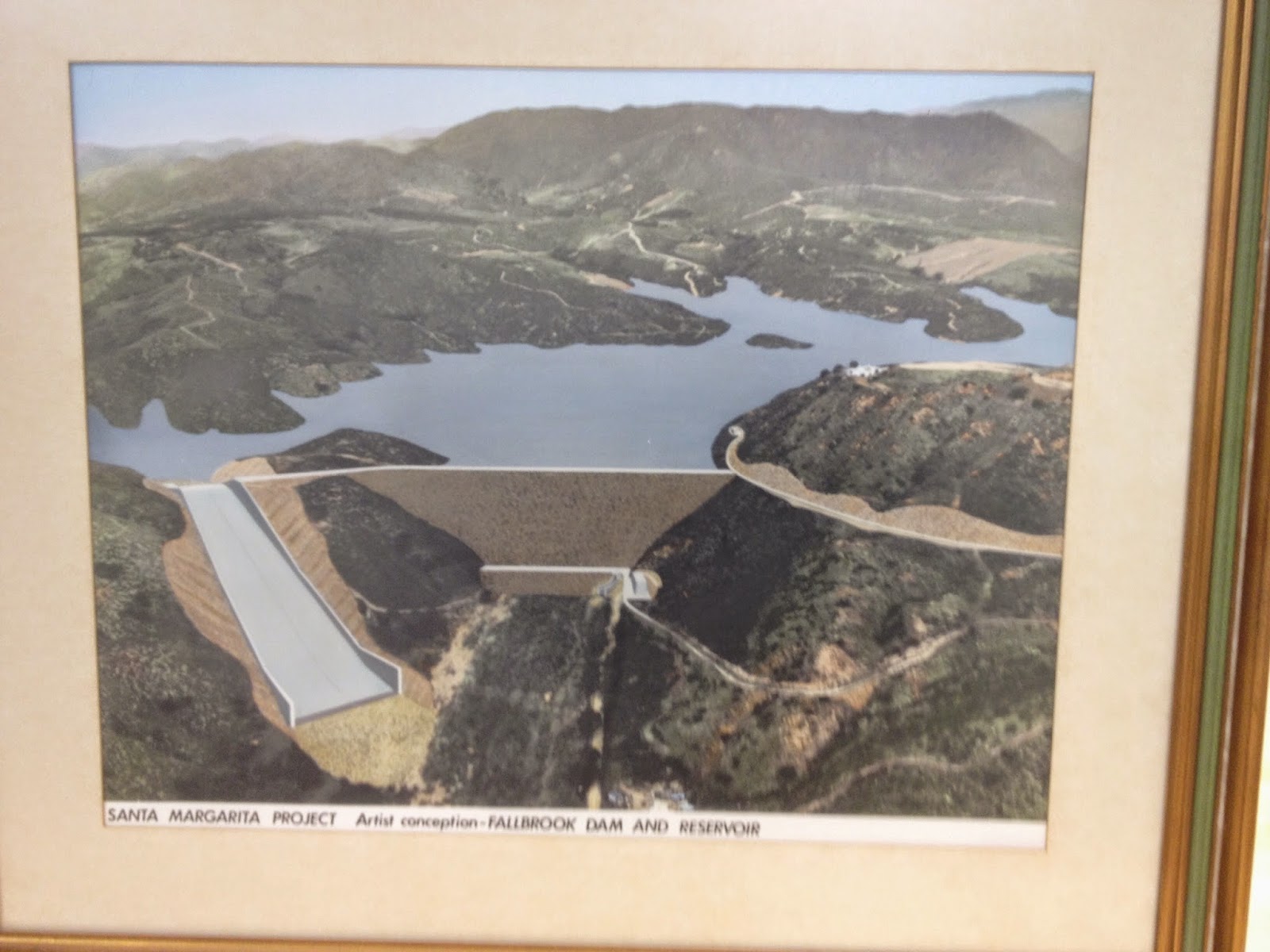 The land where these great oak children grow is public land -- owned by Fallbrook Public Utility District (FPUD), but it has no permanent protection. Now is the time that we should be putting some sort of protection in place for these amazingly special Children of the Great Oak.